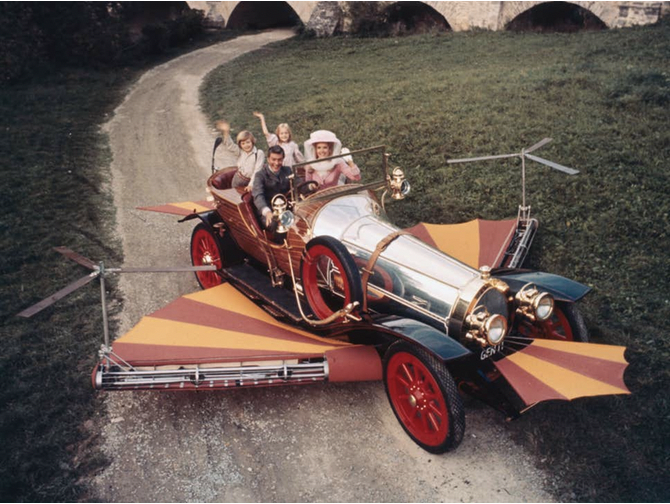 Out of the many hundreds and thousands of famous cars that have appeared on the big screen, a relatively small percentage have gone down in history for being the most recognisable and loved across the globe.

Many of them are your typical, relatively unmodified vehicles straight from the showroom floor, but most of the best ones are fictional, either being completely made up, or featuring major mod-cons you couldn’t genuinely construct in real life.

Amongst the most famous and iconic are the beloved Chitty Chitty Bang Bang – with pop-out wings and its own theme tune, even – and Back to the Future’s DeLorean; its time-travelling capabilities are pretty much unbeatable.

To celebrate the best, the LeaseCar.uk team have revealed eight of the most amazing fictional cars, which we’d love to own ourselves:

This iconic van which sports flower-power inspired designs is as recognisable as Scooby’s classic “rooby-dooby-doo” howl.

When it comes to cars with special powers, nothing is ever really going to complete with the time-travelling DeLorean.

Batman’s car is arguably the coolest superhero vehicle out there. The most recent version from Christopher Nolan’s The Dark Knight trilogy comes equipped with machine guns, rock-hard armour and remote-control capabilities.

Everyone’s favourite anthropomorphic VW Beetle not only has the ability to reach super high speeds and beat out racing competition, but Herbie would also make a great friend.

With Optimus Prime you get a two-for-one deal – a badass truck that means business, and a giant robot that, using his powers for good, will righteously lead his fellow Autobots to save the earth from the evil Decepticons.

The Ectomobile carries essential ghost-busting equipment and features a pull-out rack that holds everyone’s proton packs. The mishmash of gadgets on the roof rack was never explained in the films but is believed to include a radar, infrared sensors, and a satellite uplink.

Sean Connery’s iconic Aston Martin from 1964’s Goldfinger is equipped with an array of snazzy gadgets, including machine guns, a bullet-proof shield and a revolving front number plate. Perfect for all of your Spying needs.